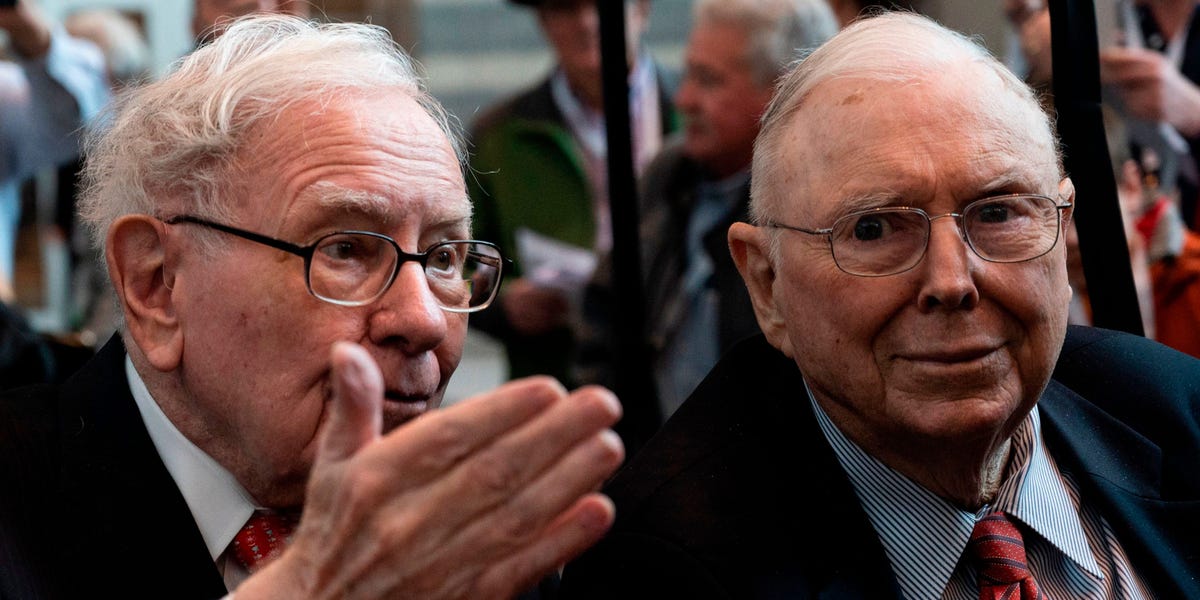 The legendary investors also called out unprecedented amounts of speculation in financial markets, teased some overseas purchases, and warned passive investors like BlackRock have grown too powerful. Insider attended the event, which was exclusively livestreamed by CNBC.

Here are 12 key takeaways from the Berkshire meeting:

Berkshire spent $ 51 billion on stocks in the first quarter, including $ 41 billion in the three weeks between February 21 and March 15. It only sold about $ 10 billion worth of stock in the three-month period.

“A few stocks got very interesting to us,” Buffett said, noting Berkshire was able to rapidly deploy its cash because of the frantic trading in markets at the time.

“We found some things we preferred owning to Treasury bills,” Munger said.

The stock market has behaved like a casino or gambling parlor “to an extraordinary degree” in the last couple of years, Buffett said. Berkshire was able to build a 14% stake in Occidental Petroleum in the space of 11 days last quarter because of “crazy” speculation and people treating companies like “poker chips,” he added.

“It defies anything that Charlie and I have seen – and we’ve seen a lot,” Buffett said.

“It’s almost a mania of speculation that we now have,” Munger said, comparing the traders to “people who play craps and roulette at the casino.”

Buffett reiterated his view that bitcoin is worthless because it is not a productive asset like farmland or an apartment.

“If you told me you owned all of the bitcoin in the world, and you offered it to me for $ 25, I would not take it because what would I do with it?” Buffett said. “I have to sell it back to you one way or another. It’s not going to do anything.”

Munger also railed against the most valuable cryptocurrency.

“In my life, I try and avoid things that are stupid and evil and make me look bad in comparison with somebody else, and bitcoin does all three,” Buffett’s business partner said.

Munger argued that bitcoin is a stupid investment as it is likely to go to zero, and evil because it undermines the

and the US dollar, while also making the country “look foolish” compared to China, which has banned it.

4. Another bite of Apple

Buffett revealed he bought some Apple stock in the first quarter as he wanted to own more of the company, and he knew Berkshire’s ownership would grow over time due to the iPhone maker’s repurchases.

The investor told CNBC that he spent about $ 600 million on Apple shares when the company’s stock price fell last quarter, and he would have bought more if the stock hadn’t rebounded.

Buffett disclosed he’s been dabbling in merger arbitrage. While one of his deputies established Berkshire’s stake in Activision Blizzard last year, Buffett has boosted it from about 2% to 9.5% since Microsoft agreed to buy the video-games giant in mid-January.

The investor noted that Activision Blizzard stock traded below $ 82 last quarter, well under Microsoft’s offer of $ 95 a share. He added that Berkshire previously invested in Monsanto and Red Hat when those companies were set to be acquired.

“If the deal goes through, we make some money. And if the deal does not go through, who knows what happens,” Buffett said. He added that Munger tends to wonder why he’s fooling around with this stuff, “and Buffett chalked it up to being an” old fire horse, “or maintaining an old habit.

Munger appeared to trumpet Chevron, which was previously known as Standard Oil of California, during the meeting. Berkshire’s first-quarter earnings on Saturday revealed the conglomerate sharply increased its stake in the energy giant last quarter.

“I’m basically in love with Standard Oil, and I do not have this feeling that it’s an evil, crazy place,” Munger said. “I wish the rest of the world worked as well as our big, old companies.”

Buffett estimated that Berkshire spent about $ 5 billion buying three German securities and a Japanese security last quarter, and rounded up its stakes in five Japanese trading companies to 5.85%.

Buffett disclosed that Berkshire’s businesses had experienced an “extraordinary” amount of inflation, and said the Federal Reserve and Treasury’s stimulus efforts during the pandemic, while necessary, were responsible.

“We’ve had a lot of inflation, and it was almost impossible not to have if you’re going to mail out the kind of money we’ve mailed out,” Buffett said.

“It happened on a scale we’ve never seen before,” Munger said about the stimulus, adding that authorities “drowned the country in money for a while.”

Buffett also noted that inflation “swindles almost everybody,” from stock and bond investors to cash hoarders. He told the crowd their best defense against it was to invest in themselves as “their abilities can not be inflated away.”

9. Setting an example with Alleghany

Buffett attributed his $ 12 billion offer for Alleghany in March to the insurer’s CEO sending him an email in late February. The Berkshire chief said he had “four big file drawers” full of documents about Alleghany, and had been following the company for six decades, so he already knew how much he was willing to pay for it.

The investor also explained why he insisted Goldman Sachs’ advisory fee be deducted from his offer for Alleghany, trimming it from $ 850 a share to $ 848.02. He and Munger had negotiated extremely cheap “fairness opinions” from investment banks in the past, and essentially viewed them as a rip-off, he noted.

“I just thought it would be interesting to have people realize that it’s not playing money, somebody pays it, and it’s a game,” Buffett said. “You’ve got an eccentric chairman and that’s what he did.”

10. Passive investing has gone too far

“A good thing is out of control and counterproductive,” Munger said about BlackRock, Vanguard, and State Street’s enormous influence on companies.

“I do not think it’s good for the country to have three passive investors, with bright young men from Harvard or whatever, telling them what proper governance of corporations is,” he added.

11. Staying out of politics

Buffett indicated he will not be commenting on political issues anymore, as he does not want to risk boycotts of Berkshire’s businesses that could leave his employees and shareholders suffering.

“The best thing to do is to basically shut up and not have a bunch of people facing consequences that they did not ask for in the first place,” he said.

12. More controls in the future

Buffett predicted his successor as Berkshire CEO, Greg Abel, would not be able to make big decisions as quickly and freely as he does.

“My guess is that the board will put some more restrictions, or they’ll have some more consultation on some matters than they do with me,” Buffett said. “They will not need to, but they’ll feel that they have not had the experience, they have not seen him as long.”

Read more: Warren Buffett is on a long-awaited buying spree. 7 experts break down why the investor spent $ 23 billion on a trio of big-ticket purchases.