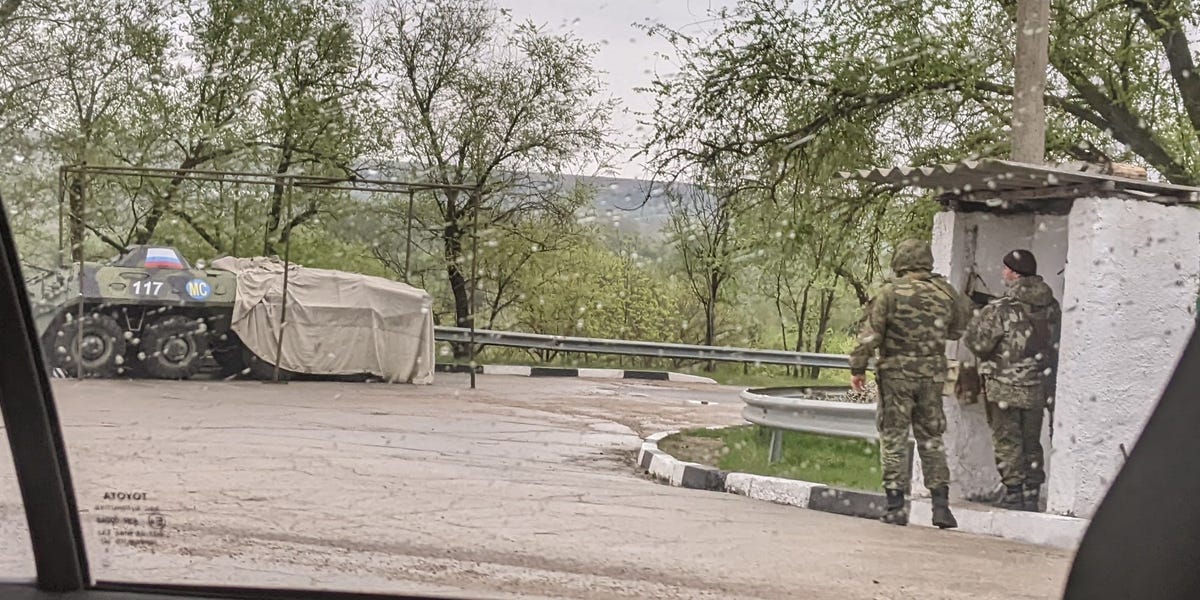 MOLOVATA NOUĂ, Moldova – Victor Besleaga remembers well the start of the war that killed his brother. It was dark when Russian troops surrounded the station in Dubăsari, a 20-minute drive from the border with Ukraine, where he was working as a police officer.

Less than a year earlier, in 1991, Moldova had declared independence from the Soviet Union – and, according to propaganda that helped spark a conflict that killed hundreds, it was now oppressing Russian speakers in a region that today is known as Transnistria, a breakaway republic aligned with Moscow but unrecognized by the international community.

A firefight broke out, leaving one of the soldiers dead; to save their own lives, the police soon gave up their arms and surrendered. Victor remembers being transported to Tiraspol, the self-proclaimed capital of Transnistria, and paraded before cameras broadcasting back to Russia. Overnight, this veteran of the Soviet military, trained as a paratrooper in Belarus, had become a “Romanian Nazi infiltrator.”

He spent the next month gasping for air in a tiny basement cell, packed in with 14 others, before being released in a prisoner swap. He went straight to the hospital – and from there, rejoined the police and fought to retake the city he served in.

Today, Victor, 50, with salt-and-pepper hair, gray-blue eyes and wearing a black Champion tracksuit, lives in the village where he was born, Molovata Nouă, speaking in the classroom he attended as a child, now a local history museum run by his wife. It is a 15-minute drive (and a Russian military checkpoint away) from the city where he once worked as a cop.

There is no bridge to this village, where 10 people died in the conflict that began in the darkness of March 2, 1992, and concluded some four months later. Five of the deceased were combatants who fought to keep it part of Moldova.

They prevailed. But today the village is an isolated enclave surrounded by a hostile entity. The government of Russian President Vladimir Putin insists the residents of Transnistria, next door and all around the village, are still being oppressed. There have been claimed terrorist incidents there, pinned on Ukrainians. The old fears are back.

Transnistria is, for the most part, located to the east of the Dniester river all the way to the border with Ukraine, while Moldova’s central government in Chisinau, for the most part, controls everything to the west, up to the border with Romania. Molovata Nouă is different. The negotiations that ended the 1992 conflict resulted in oddities, like this community of just over 2,100 people being engulfed by a separatist region and divided from the rest of the country by a wide river.

The only way to reach the village directly by road requires driving through a hostile entity, where as many as 1,500 Russian soldiers operate alongside Transnistrian forces, and a handful of Moldovans, as “peacekeepers” – and where some 300,000 people have forged a separate national identity, a generation now having been falsely taught that their erstwhile neighbors tried to carry out a genocide of Russian speakers.

Transnistria controls just about everything to the north and south of the village. It is an area of ​​single-story homes with white paint and tile roofs, green meadows. A small herd of goats can be seen fenced in behind one of the houses. Outside the village are agricultural lands, growing fruits and vegetables; a road connecting north and south Transnistria runs through it, and the authorities have consistently harassed the owners and defied the 1992 peace agreement, seizing crops, and even asserting ownership over the land.

For those unwilling or unable to pass through the separatist region – where oligarchs backed by free-flowing Russian gas control the politics, and where authorities maintain a blacklist of people are not free – there is a ferry, free of charge and capable of carrying both people and cars, departing every two hours during the day. But the ferry does not operate if it is too windy or when the river has frozen, as typically happens a couple weeks a year. During the pandemic, Transnistria closed its borders altogether to arrest the spread of COVID-19, eliminating that travel option for more than a year.

The village itself hosts Russian and Transnistrian forces, who greet visitors as they get off the ferry, and an old but regularly maintained BTR-70 armored personnel carrier from Russia, an indignity – foreign usurpers on land that was mutually agreed to be Moldova – that some now find intolerable.

“The feelings about the Russian peacekeepers were always negative, because they are staying illegally in the village,” Victor said. “After the war started, the relationship between locals and peacekeepers became even worse.”

The anger at their presence, and intrusive searches, takes the form of people talking back. But there’s an underlying fear given what Russian troops are up to elsewhere: “That the so-called peacekeepers could occupy the administrative buildings in minutes, using their armored vehicle and guns.” Indeed, Russian operatives carried out a similar invasion of Crimea in 2014, one that was over before the outside world knew what had happened.

That fear has been exacerbated in recent days by a 24-hour series of explosions in Transnistria, including a purported attack with a grenade launcher on a building used by security services in Tiraspol, the self-proclaimed capital, and the destruction of radio towers there . Authorities also alleged that an attack was launched – from Ukraine – near an ammunition depot that is guarded by Russian forces and believed to be one of the largest in Eastern Europe; Ukraine has denied this.

Transnistrian leaders insist they want nothing to do with the war raging next to them. In Tiraspol, where Russian flags hang on every government building, there is no public propaganda in support of Russian intervention there; it’s as if the war, just 20 minutes away, does not exist.

But Victor believes the recent explosions in Transnistria are the work of Russian military intelligence, designed to justify Moscow intervening further there and expanding a foothold that could be used to threaten not just Moldova but states in the Balkans, some of which are part of NATO alliance. Whatever it is happening, he does not think it bodes well.

Military experts generally do not think much of the forces currently stationed in the breakaway republic. Their equipment largely consists of museum pieces, even if the raw numbers – a combined Russian and Transnistrian force of perhaps 10,000 men – are more than twice the size of Moldova’s army.

But in Molovata Nouă, locals say they can hear regular combat training. The threat may not be great, particularly to Ukraine, but to them it feels real. And their fear is that, even if the current rumblings from Transnistria do not culminate in all-out combat, as in 1992, Transnistria, with Russian support, could exploit Moldova’s desire to avoid an existential war with Russia by consolidating control over its side of the river without much of a fight, providing a feel-good victory for “Russian speakers” that the Kremlin could trumpet back home.

The last military conflict in Moldova broke apart the country, family and friends suddenly finding themselves on different sides of a new de facto border, and consuming wildly different narratives about what had just happened.

Now the conflict in Ukraine and Russia’s plans for the region are fraying relations within the same communities.

Now, as then, “war is dividing families and friends,” Victor said. And people think what’s happening in Ukraine could change their lives here again.

and a smorgasbord of sweets imported from Ukraine. She is 47, wearing a light blue hoodie and gold hoop earrings. Behind her was a portrait of her mother, who also lived in the village. They look identical.

Relationships with in-laws are tenuous in the best of times. But now Alexandra and Victor say they hardly ever talk to the parents of their daughter’s husband, who also live in the village. It’s impossible without fighting.

The village, like many in Moldova, has seen many young people move away, leaving an older population who are “victims of propaganda,” she argued, namely from Russia. Some are nostalgic for the time of the Soviet Union, she said, “mainly because people were young and healthy, everyone had a job, real problems were hidden by the regime and there was no border between Moldova and Transnistria.”

But the rose-colored sentimentality is exploited by a geopolitical agenda found on television and in online news, Moscow portrayed as a besieged defender of the Orthodox faith and the traditional family in the face of constant attacks from a decadent Europe. “Russia is protecting Eastern Europe from LGBT communities in the West, Nazis from Ukraine have to be destroyed, Russia is a great economic power, etcetera,” Alexandra explained.

“Unfortunately, there are families in which children who are living abroad tell their parents that life in Western Europe is much better,” she added, “but their parents do not believe them.”

About a third of the population, she said, would welcome a Russian intervention. The local gossip is that some have already stocked up on rubles, awaiting the day.

But even as they say they are used to Transnistria and its Russian backers making noise and causing problems, this time it feels different. However unlikely, there is a war in Ukraine.

Victor said he would stay and take up arms again – if the government gave him any.

Alexandra has asked him to leave. As a veteran of the 1992 war, she worries he’ll be targeted before any conflict even begins. Of course, she hopes one never does. She loves living in the same village as her mother, and her mother before that.

“People are really kind,” she said, “except when you start talking about politics.”

Have a news tip? Email this reporter: cdavis@insider.com