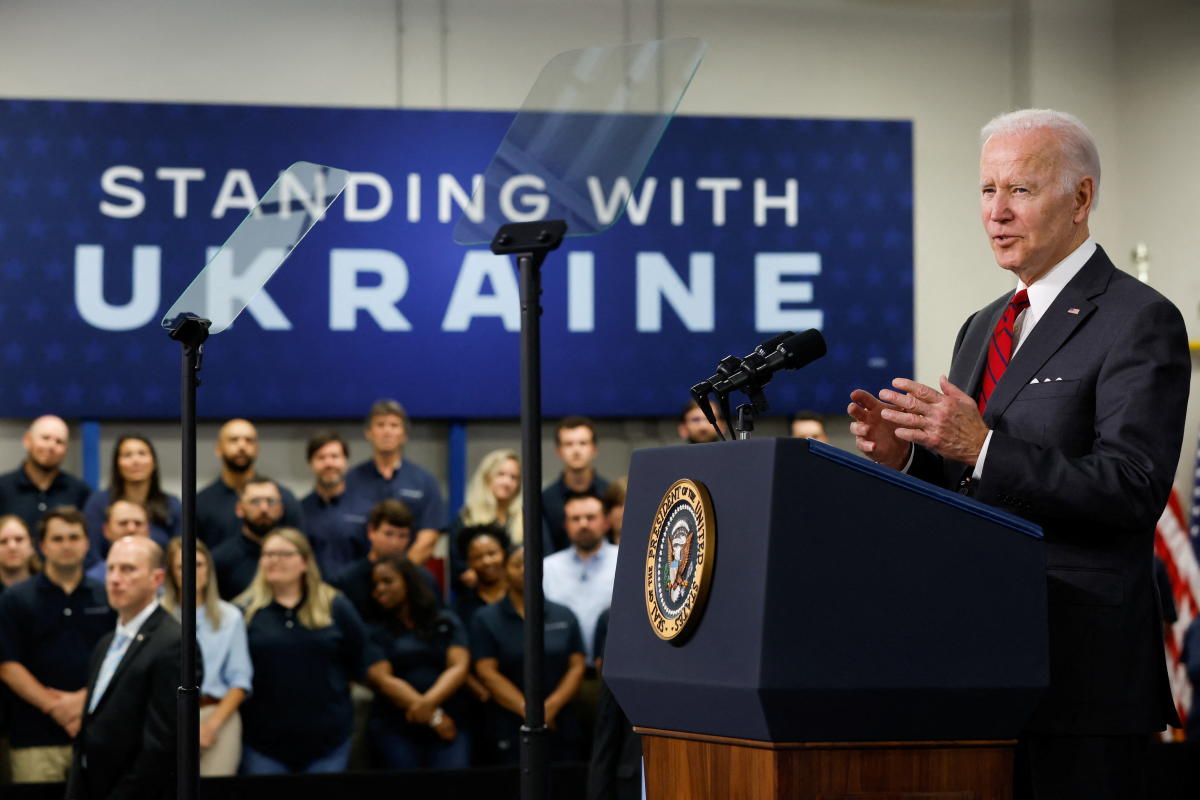 The Biden administration recently unveiled a plan to welcome a small portion of the millions of Ukrainian refugees fleeing the Russian invasion, but for those who want to help, there are key conditions to be aware of before applying.

“Uniting for Ukraine” is a humanitarian parole program that will allow individuals and private groups to sponsor or offer temporary protection to Ukrainians who have been displaced by the war.

In order to serve as a sponsor, people must be U.S. citizens, or residents who hold lawful status in the United States, including beneficiaries of Deferred Enforced Departure, Temporary Protected Status, Deferred Action, according to U.S. Citizenship and Immigration Services.

“There’s a lot of interest in helping them,” said Jacob Sapochnick, an immigration lawyer in San Diego, who told Yahoo News that he has received a lot of calls from people asking how to become sponsors. But he explained it is important for people to know that becoming a sponsor is more than just signing a document.

“They sign a contract essentially to guarantee they’re going to support them during those two years,” Sapochnick said, adding that it is a good idea before committing to the sponsorship to connect with the refugees, talk to them and “understand who they are. vein.”

“Maybe do some video calls with them before. … It’s a big responsibility, ”Sapochnick said.

These sponsors will also have to go through security and background checks, as well as “demonstrate sufficient financial resources to receive, maintain and support the individuals whom they commit to support for the duration of their stay in the United States,” according to USCIS.

Since “Uniting for Ukraine” launched last week, many Ukrainians who do not have family or friends and wish to seek refuge in the US under the new program have been desperately looking for sponsorship. At the same time, many nonprofit organizations have mobilized to connect these refugees with Americans who wish to help them.

Yanina Makoviy is the administrator of a Facebook group “Helping Ukrainians in the USA,” which was created when the war began in order to provide information for Ukrainians who wished to come to the US, as well as for Americans who had an interest in assisting them. Before the Biden administration program was announced, Makoviy says the majority of Ukrainians who posted in the Facebook group sought information about how to enter the country from Mexico.

When the private sponsorship program was first announced in late April, a senior DHS official told reporters that US immigration officials had processed close to 15,000 Ukrainian nationals over the last three months, most of whom entered the country via the US-Mexico border.

However, now that the new program exists, US officials have urged Ukrainians to stop traveling to Mexico in order to enter the US They’ve also said Ukrainians who arrive at US ports of entry without a valid visa – or without preauthorization to travel through the “Uniting for Ukraine” program – will be denied entry and will be asked to apply to the program.

Makoviy says the majority of messages posted most recently to the Facebook group, which now has more than 3,000 followers, are from Ukrainians seeking sponsorship.

“I feel like everyone who is posting in the group, they do not have family in America,” Makoviy, who is Ukrainian, told Yahoo News. “There are a lot of people who are coming from Kyiv, Mariupol, so they are saying that their homes are totally destroyed, and then they are looking for sponsors [so they can] come to the USA, ”she added.

Makoviy says Ukrainian refugees looking for sponsors are adults of different ages and professions. Many of them are women and children, especially because Ukraine’s government has limited the outflow of men as part of the war effort. She also says the refugees she talks to emphasize their willingness to be self-sufficient and work as soon as they are allowed to get a work permit.

“They do not want to be a burden, so they say, ‘We’re going to start working right away. We will find a house right away. Do not worry about housing, we’ll try our best to do it ourselves, ‘”she said.

But many of these refugees fled with only a few possessions and little money and will likely need considerable help once they arrive. Refugee resettlement advocates and immigration lawyers say potential sponsors must understand their obligations in advance.

“There’s an added responsibility here because it’s people who are fleeing a crisis, they’re arriving only with what they can carry,” Nazanin Ash, CEO of the nonprofit organization Welcome.US, told Yahoo News. “When you are signing up to be a sponsor, you’re signing up to be the welcomer and the navigator for the beneficiary, the family that’s coming to the United States, and that means thinking through and providing all of the things that would allow someone to feel welcome and get their footing in a new country and in a new community, ”Ash added.

Welcome.US is a nonprofit group that coordinated help for Afghan refugees in the US last year, after the evacuation of more than 65,000 Afghans during the US military withdrawal from Afghanistan. Ash told Yahoo News that her organization is now launching a new effort to recruit 100,000 American residents who want to connect with and sponsor Ukrainian refugees. This sponsorship effort, she said, is supported by a $ 3.6 million contribution from Goldman Sachs.

“The US government is not doing that matching … so what we’re doing at Welcome.US right now is helping to design some of the matching platforms that we hope many organizations can then use to be able to match sponsors with beneficiaries who are looking to be assisted, ”Ash said.

“Uniting for Ukraine” is part of the Biden administration’s commitment to offer refuge to up to 100,000 Ukrainians who have been displaced by the war. More than 5.6 million people have fled Ukraine since the Russian military invaded the country on Feb. 24, according to the United Nations.

Ukrainians who qualify will be allowed into the country for up to two years. Once here, they will be able to apply for work permits. In order to be eligible, applicants must have been residents in Ukraine as of Feb. 11, 2022, and complete vaccinations and other public health requirements, as well as pass various security screenings.

Even though this new program offers a “glimmer of hope” to Ukrainians, some refugee resettlement agencies have expressed mixed feelings about the program, Krish O’Mara Vignarajah, president of Lutheran Immigration and Refugee Service, said in a statement. One concern is that it may take refugees more than two years to be able to return home, whether that’s due to ongoing dangers in Ukraine or to other reasons.

Another concern is that the program defines the fleeing Ukrainians as “humanitarian parolees,” a temporary status given to some people fleeing armed conflicts and other crises.

“By coming to the US as parolees and not officially as refugees, Ukrainians will miss out on two key things the US refugee program provides – the ability to choose for themselves and their families whether it’s best to stay in the US or to go home, and the initial financial and integration support the refugee program provides, ”Melanie Nezer, senior vice president of global public affairs of the Hebrew Immigrant Aid Society, told Yahoo News.